Build Your Own Internet

What is a node?

A node is a poin - a single point on a network. This point may be a computer, a server, a router, an antenna, or pretty much anything that can be part of a digital communications network.

More importantly, a node is a person. Yes, to be a node, any of the aforementioned devices must have a human that operates, maintains, and, of course, uses it. Sorry, but there are no bot nodes (not yet at least).

The human element of networking cannot be stressed enough.

Ok, how do I become a node?

Now, you may be curious how one becomes a node. Though you may be unaware, by virtue of reading this very website, you are (probably) already a node. A node on the internet. Sure, you are obscured behind a little illusion called Network Address Translation (NAT) and the Internet Protocol (IP) address of your service provider, but nonetheless a node. Maybe that’s not what you had in mind. Maybe you would like be a node on a different network, one that is separate from “the Internet” as it is currently conceived. If so, you found the right node; we’re here to tell you this is possible.

That’s not to say it is simple.

First, you may want to look at others who feel the same. If there’s someone near you, it may be best to contact them and see how they become nodes on their alternative network.

If not, then may be you can become a node on your own alternative network. But that won’t be much fun without other nodes to talk to. So, start a group, talk to neighbors, meetup with friends, or just say hi. Talk with others in your community about why being a node in an alternative network is important to you.

(5 years later) Ok, I made some friends, now how do I become a node?

Now that you have a community of people who want to be nodes on an alternative network, you’ll need to figure out what kinds of nodes might be useful for your network. As mentioned earlier, a node can really be any point in a digital communications network, but generally, in existing networks, there are three types of nodes that you may need: home nodes; extender nodes; and exit nodes: 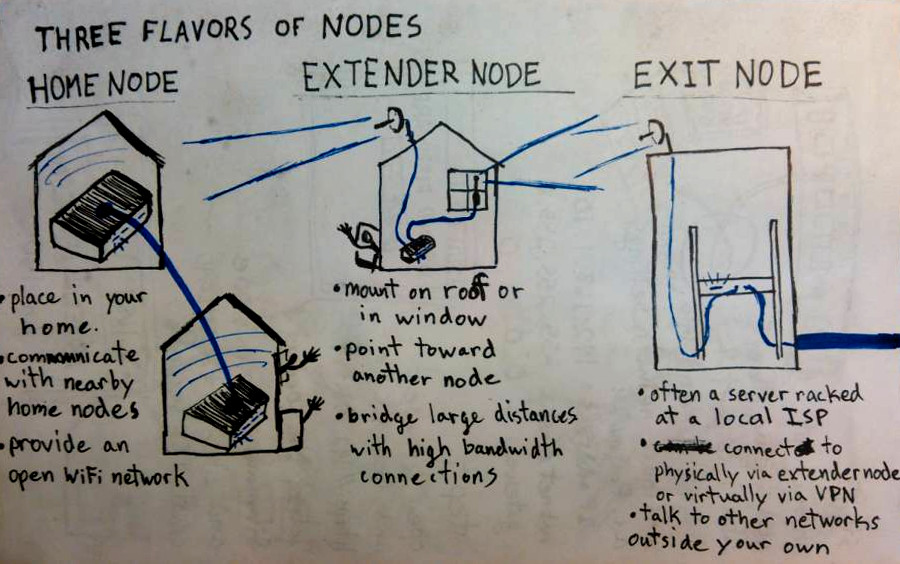 Whew, finally got my node, so what do I do with this thing?

After figuring out what type of node you need, you may consider flashing it.

Flashing typically refers to the process of replacing the default firmware of a device with a new, customized firmware. Both home nodes and extender nodes can be flashed. Exit nodes are, usually, full Linux computers and, therefore, require different techniques.

To see an example of how to flash a home node, check out the SudoMesh walkthrough.